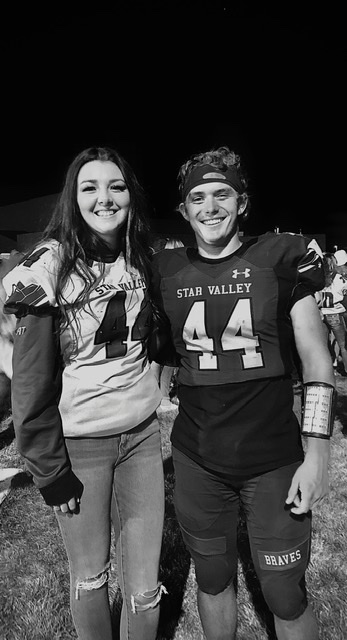 Gallery|4 Photos
Emri Jenkins and Conner Hart get together for some post-game time.

Over the years a new tradition has evolved, and it appears as though it’s here to stay. After every home football game, or sometimes even after practice, it’s common to find couples or even friends snagging a pic with their favorite player. You’ll likely see a mass of students and parents huddled at the entrance of the field after every game posing for pics.

Whether it’s the sport’s popularity in America that contributes to the interest in post-game pictures or the regard for  photos, high school students are eager to capture some of their best memories.

The tradition of wearing a football player’s jersey the week of homecoming has not faded away by any means. This occasion granted many opportunities for couples and friends to get their annual picture together wearing Braves jerseys. However, it has now become a regular occurrence for players to be swarmed by their peers for a photo after every game.

What used to be prevalent around homecoming has become a common custom among students throughout the football season. It’s unclear as to why football draws more photo ops than basketball or soccer, but it’s safe to say that you’ll surely come across a few when scrolling through Instagram or VSCO.